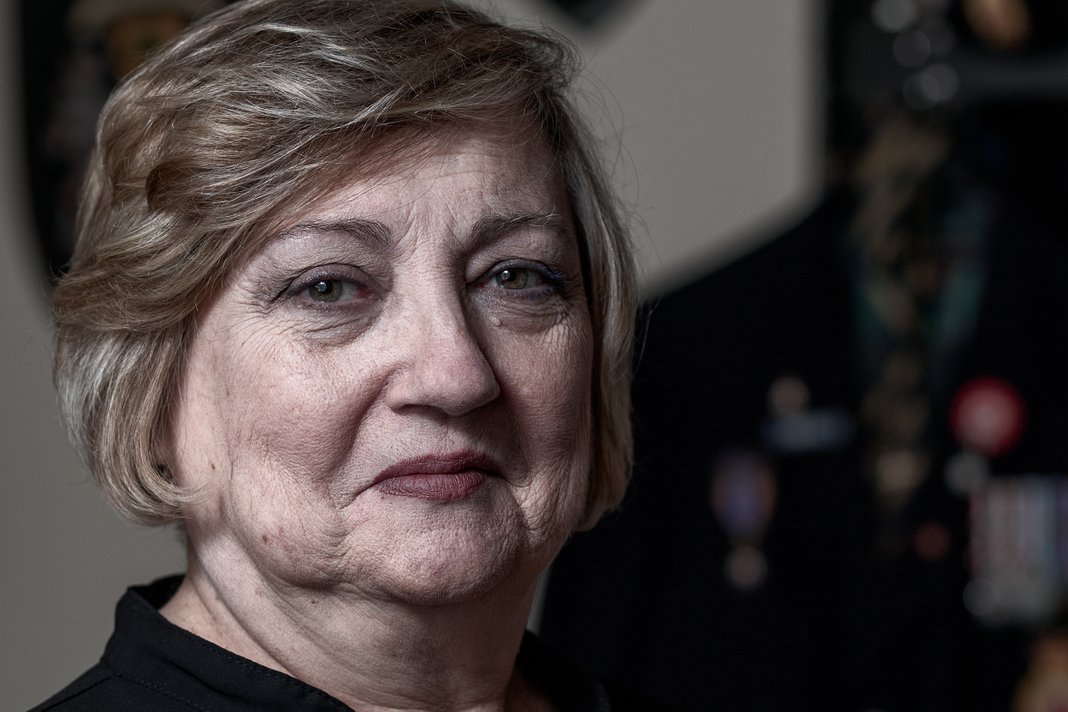 Francine was born in the Rosemont neighborhood on July 24th 1961.  She grew up in many different places, amongst them Montréal, Châteauguay and Ville de Léry, where she still lives today.

Francine’s family was special: her dad was very strict and her mom was very modern. The oldest of a family of 3 children, Francine has two younger brothers.  They had a lot of freedom which she didn’t have.  As a teen, she was in constant conflict with her father. She wanted to leave but she couldn’t because she was too young. That wasn’t keeping her from wanting it really bad. At the end of high school, she wanted to become a doctor.  She told her father whose answer was that she didn’t need a university diploma to clean diapers.  Therefore, Francine had to look for another option.  She went to the recruiting center where she is told that the minimum age to enroll is 17 and that one of her parents needs to sign.  No problem. She goes to see her mom who agrees to go with her and sign her up.  The day of her 17th birthday, she went to the recruiting center with her mom, since her dad hadn’t been told yet.  He will learn about her daughter’s new job on the day he has to take her to Saint-Jean-sur-Richelieu for her training.  Her father gave her 3 weeks before changing her mind: she stayed 22 years in the Armed Forces.

The first training for the soldiers is to show them the basic of their job.  But it also serves to teach them how to priorities.  Francine understood quickly that you can’t let yourself be overly impressed by what the officers are asking you to do like cleaning your boots, making your bed, etc.   The important thing is to do it well without letting it get to you.

After her training, she needs to learn English.  She spends 11 months at the language school.

Francine now needs to choose what she wants to do as a career.  She chooses airplane engines technician.  She moves to Summerside for her training.  She quickly realizes that that job is not for her.  She still finishes her classes but doesn’t succeed in her exams (was it voluntarily or not, the mystery remains).  She asks to choose a new career and goes for accounting clerk.  She is transferred to British-Columbia where she stays 4 years.

Francine is always the first to raise her hand when the army needs something.  That gives her the opportunity to go to Germany for 4 years, where she meets her first husband, an officer.  Being a woman in the army is not always easy, especially at that time.  Going out with an officer when you are a woman soldier is not well thought of by some.  Francine had to go through it. Even after her wedding which took place during the last year of her stay in Germany.  Back in British-Colombia, she goes through a difficult time.  Her marriage to an officer puts her at odds.  The non-official thing to do when there is a marriage between an officer and a woman solider is for the woman to leave the army.  She doesn’t really want to do that but still makes the decision to do it.  But her commanding officer has very good reasons why not to do it, so she decides not to quit, just before she hits the date of no return.  She is lucky that it is even possible and that she can continue her career.

Francine works really hard to convince the army to let women go do missions to Cyprus. The army was established there but women were not allowed to go.  After a lot of work, she finally gets what she wants: she will go to Cyprus for 6 months.  Before leaving, she has to do some medical tests.  But surprise!  She is pregnant. That makes it impossible for her to go to Cyprus.  That said, her battle served other women who were able to go.

She is then transferred to Petawawa, but it wasn’t a really positive experience for her.  One of the persons who were against her wedding to an officer is there.  That person had given her the worst review of her career during her last year in Europe, right before her wedding.  But in British-Columbia, she had really good reviews… She stays 3 years in Petawawa during which time that person will try his best to create troubles for her.

Next, Francine is transferred to Ottawa, which she calls the black hole: you know when you get there, you never know when you’ll leave.  She enjoys her first years there but after a while, she starts longing for a change.  That said, during her time in Ottawa, she got a few good opportunities, like a mission in Haiti with the Special Investigations unit.

To get out of Ottawa, she does something she never thought she’d do:  she volunteers to help young women soldiers of the 22nd regiment.  Francine is transferred to the Citadelle in Québec City. She regrets her decision at first… but after a while, she lives the best 3 years of her career: she trains with the soldiers, she has fun and ironically, she never sees any women soldiers coming in!

Before being an accounting clerk, Francine is a soldier.  She has to keep in shape. Military training is not easy.  Francine says you learn to live with it but not all women can do it.  Exercises are often tough and even tougher for women: 3 weeks in the woods sharing a tent with 10 men and 2 women, without showers… All this training takes a physical toll and for Francine it was especially hard on her knees and back.  She is transferred to Toronto in a reserve unit, which makes it possible for her to see a specialist for her back.  She stays there one year, which is the last year of her career. Her back is in such bad shape that she needs to quit or else she will be paralyzed at 50.

Francine would have liked to stay 35 years in the army.  In the end, she will be there 22 years.  What she enjoyed most about her career? The mix between training and work. The different sports, the adventures she went on while while working.  Her missions and the travelling she did.

Her grand-father once told her: "If you do what you love, you will never work a day in your life!" This represents Francine’s career very well.

I would like to thank Francine for participating in The Veterans Project and for her generosity during the interview and photo shoot.