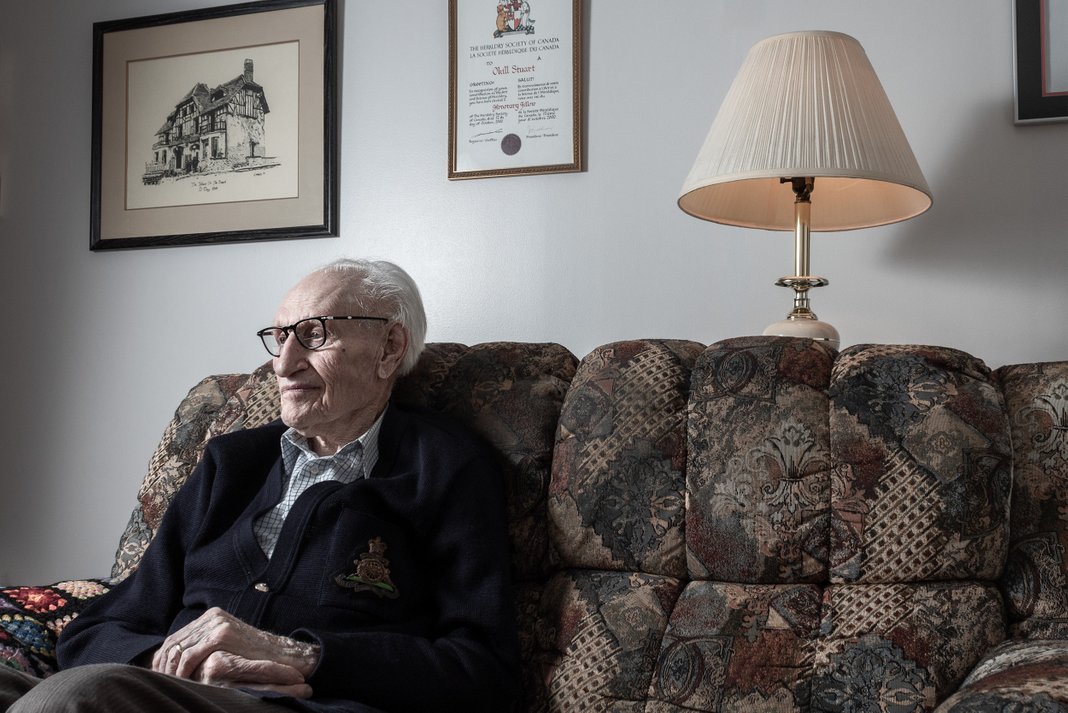 Sir Campbell Stuart, his uncle, didn't have children and offered to educate Okill and his older brother.  He first went to Bishop's College in Lennoxville, Québec.  In 1937, Okill was sent to England for schooling.  The first six months he was in a school in Kent to learn how to be a gentleman.  After six months, he was sent to Gordonstoun school in Scotland. He studied with Prince Philip and to this day they keep in touch. In 1938, when the war was eminent, he was called back to Canada.  If ever he was going to serve in the war, it would be in the Canadian Army.  Okill was 17.

But the war was delayed a little bit and his father decided that if Okill was ever to be doing business in Québec, he needed to learn French.  So he sent him to work in Chicoutimi in the pulp and paper industry for around six months.  He spent most of his time in the woods, doing survey work on trees. One day they bumped into a lumberjack who informed them the war had started three weeks ago.  They hadn't heard about it before!  Okill went to Chicoutimi to buy a radio, went back into the woods to finish his work and a couple months later he was back home volunteering to go to war.  Why did he enlist?  It was his duty to go to war.  Everybody in Saint-Lambert felt that way.  He volunteered, not knowing anything about the army.  To put it in his own words, he "didn't know the difference between a submarine and an airplane". His father had a friend who fought in WWI and was forming a battery to go to war.  He enlisted in Montréal to be a part of it and from there went to Petawawa where they became a regiment.

They spent a year in Canada learning and training. They then left for the war and reached Scotland in 1942, where they trained again. His division, the 3rd division, was the only one that participated in D-day. All the D-day preparation started in 1942. At the time, they were not really aware of what exactly was D-day, but they knew it was going to be big.  They learned more and more about it as time went on.  There was this one time before D-day. when they were sent very close to the coast of France as the generals were hoping the Germans would open fire on them so they'd know where their guns were located.  But the Germans didn't open fire, luckily for Okill, as he probably would have been killed right then and  there if they had.

Six weeks before the invasion, they were given self propelled equipment to replace the 25-pounders field guns.  Because these new tanks had what it took to land anywhere, like on sand.  They kept that equipment for about six weeks after the invasion.

June 4th 1944, his regiment was in Southampton in close quarters and they could hear it coming.  They were issued French Franks invasion money guaranteed by the Bank of England, money they could use after the landing in France if needed.  They knew what was coming.  The next day they set sail from Southampton.  As they were passing the Isle of Wright, the signal was given to open sealed orders.  That's when they learned exactly what was happening, where they were going.  As a bombardier and an officer assistant, he knew.  While sailing, they played poker for half the night.  Okill said he doesn't remember being scared. He was busy.

All vehicles had mines around them to be able to use them when they got to France.  But Okill and his colleagues disobeyed orders and they threw them overboard.  They wanted to avoid being destroyed if the Germans shot at them, and it's a good thing they did:  other tanks were destroyed because of these mines.

When they reached about six feet deep of water, and although their vehicles were equipped for this type of landing, they hit a mine and sank but they made it anyway.  The first vehicle didn't have that chance.  They hit a mine and everyone got killed.

There he was, on top of the command tank, and everywhere around him there are gun shots, explosions, so many things going on at the same time, he doesn't have time to get scared: you are busy trying to make it and do your job.

He landed with dry feet on the beach, went to Juno Beach in the town of Bernières-sur-mer, but they got stuck in a traffic jam, believe it or not!  There wasn't enough room for two tanks to pass at the same time, so they had to wait in line. They were stalled waiting to get in when an elderly couple ventured out with a bottle and a glass.  They pointed to him and he said "YES, I don't know what it is but YES".  He had a glass of Calvados, that's what he had.  It's a very strong drink!  And Okill said that after everyone in the tank got a drink of that liquor, their communications stopped for about five minutes!

They went to take their first position and that's when one of the tanks close to them who still had their mines was shot by the Germans.  That was the field they were supposed to be in.  Since they couldn't because other tanks were already there, they went back to another field on the edge of the beach where they landed.  A young French boy, about 14, with a black beret, signaled to them that the field was mined.  Okill asked him how he knew that.  The boy said the Germans had him mine the land.  Okill said "Is that so?  Show us a way in".  The boy refused "No way, I'm not going in" but Okill pointed his gun at him and said "Yes you are. Get on the tank and show us a way in".  They went in without any problems and reached their first position.

That first night, with no place to go, Okill crawled under the tank while German planes were shooting, the bombs falling all around them.  He felt scared.  He had nothing else to do or think about.  Needless to say he didn't sleep.  He said he thinks he didn't sleep for the first three days.  After a few days, things settled down a bit, they moved in and did some fighting.  Like to secure an airport place for their pilots and planes. His division had the deepest penetration on the first day of all forces.  They got into the outskirts of Caen on the first day, and then they were pushed back.  They bombed Caen and when they finally got in, they couldnt even travel through the streets because of the destruction.

The battle of Falaise Gap (or Pocket) took place a week or so later.  They surrounded the Germans and bombed them, as they were trying to escape.  Okill said he's never seen so much burned equipment.  And he remembers the smell of death.  It's the only time he really smelled death.  Dead Germans, dead cows, dead horses... it was an awful time.

They had a lot of dirty fighting in Normandy.  You take a town, the Germans take it back, you do it again.  You get bombed by your own troops who made mistakes while trying to bomb the Germans.. so many things happened.

Then it's on to Belgium, Leopold Canal, between Belgium and Holland.  A lot of dirty fighting there.  One night the Germans broke a dike and Okill just had time to move before being flooded.

During the battle of the Bulge, he was asleep in a bed (for the only time in the war), off duty, and the owner of the house where he was came to see him, woke him up, to tell him his guns were being taken and facing in the wrong direction.  The Germans had broken through and they didn't know which way they were coming.  It was cold, snowing, the airplanes were useless.  When Okill reached his gun positions, the skies cleared, the sun came out, the planes flew and knocked out the Germans.  It was the German's last big offensive of the war.

One of the highlights of his time in the war was in this one little town.  Everything was still in this town, it was weird, something was off.  He was supposed to set up a new gun position.  Behind him out of a windmill's basement came the Mayor and the citizens of the small town.  He went and talked to them and they proceeded to give him hugs and kisses.  Okill told them "Didn't you get all this hugging and kissing out of your system when the infantry went through yesterday?" The Mayor replied "You are the first one".  "What? Where is our infantry?"  "The Germans pushed them back, they are a mile back".  "And where are the Germans?"  "Just where you are setting up your gun position, just down there at the edge of town"... Okill was puzzled.  "What do you mean?"  The Mayor replied "Oh yeah, look, the side of the road, you'll see their hats in the ditch".  Okill was stunned. "That's where I was, why woudn't they kill me?" The Mayor said "Ohhh they are waiting for bigger and better things!" If there was ever a time where you'd be glad to be considered "not big enough", that would be it.

Okill called his men and they set their gun position back a bit.  They Mayor told them that the Church Spire was an observation post where there was a German officer right at that moment looking at them.  So the first thing they did is knock down the spire.  Good call.

And what was the name of the town where all that took place, you may ask? Saint-Lambert, believe it or not.

When asked about his thoughts of the Germans during the war, Okill said they only heard about the Holocaust when the troops entered Germany.  Before that, they knew only that Hitler was bad and needed to be stopped.  He didn't have any other thoughts about the German fighters.  This is what he had to do, it was his duty.

After the war, Okill stayed in Europe running a yacht club awaiting to be brought back to Canada.  After he came back to Saint-Lambert, Okill had a long career being a broker and he still lives in Saint-Lambert to this day*.

Okill Stuart received and continue to receive many medals and honors for not only what he did in the war, but everything he was implicated in and still is to this day.  The list is long and exhaustive, as it should be.  Okill Stuart is a man who is bigger than life.

I cannot thank him enough for agreeing to share his story with me and allow me to take his photograph for my project.

Okill Stuart is also a Founding Director of the Juno Beach Center in Normandy.

*Okill Stuart sadly left us in July 2019 at the venerable age of 98.  I would like to offer my most sincere condolences to his family and relatives.  We lost a great man.