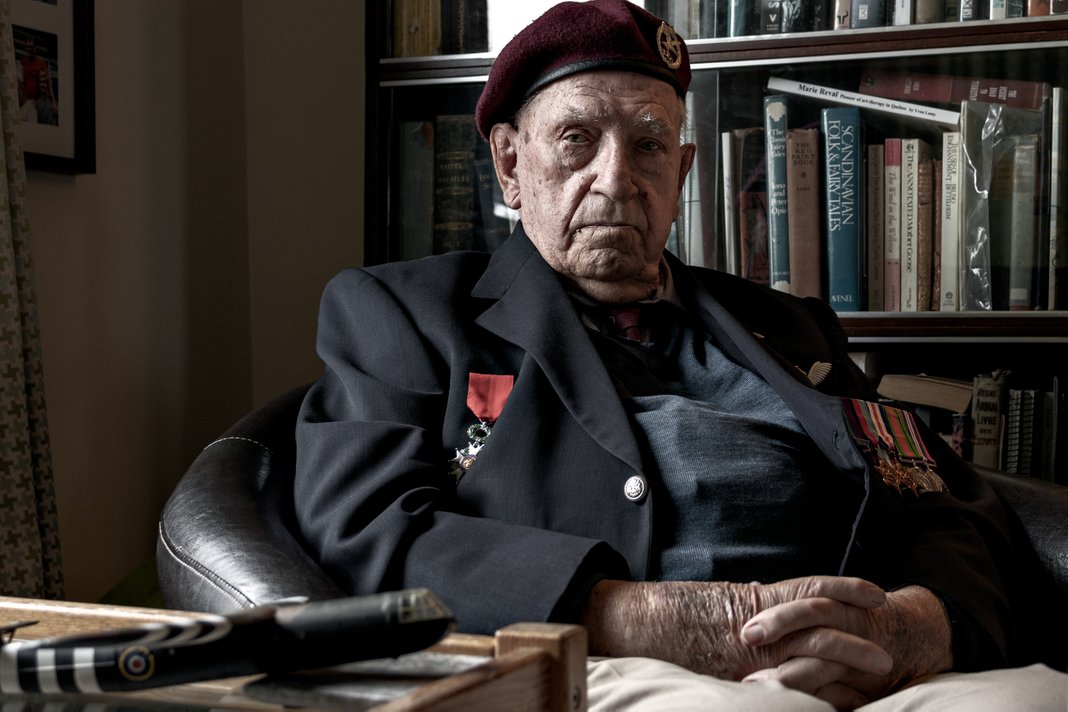 Lynton Martin was born in Northern London, England in 1923.  When he was a child, Lynton and his family moved around quite a bit because of his father’s work.  Before he was 18, Lynton had been to 4 or 5 different schools. He is 16 when WWII brakes out. Lynton’s father is a pacifist.  He doesn’t believe in uniforms or anything military.  In the past, he had refused to let Lynton join the air cadets because for him it is military association, which is not untrue.  Lynton enrolls in an art school for about a year, but he already knows he is going to be wearing a uniform sooner or later, and probably sooner than later.  There is a war and it is the thing to do. In the meantime, he is working part time, two or three little jobs, but he doesn’t take his jobs very seriously because he knows he is going to be in the armed forces one way or another.

Lynton is conscripted at 18 and he is given basic training in Yorkshire.  After 3 or 4 weeks, he passes some tests and it is decided he would make a good gunner.  He joins the artillery. He is posted with the anti-aircraft unit.  The location he is sent to is pretty isolated. It is very boring… you can’t even get out much.  Lynton is so bored, he starts volunteering for things, anything, crazy things!  Like parachuting, commandos… he is always turned down.  He then sees a notice in the office: “Applications are invited to a newly form unit for the gilder pilot regiment”. Of course he signs up! A few days later he is told he’s going to London. Lynton is very happy about that! He is sent to Northern London and is given all kinds of tests, IQ, visions, etc.  He is then sent back to his gun site.  Not for long though, because soon after, he is called for training to become a glider pilot.

Soldiers are coming from all over to fly gliders.   However, the training they receive has nothing to do with aircrafts!  They are learning the drill, how to clean the rifle, polish the brass on their belts, etc. But not all soldiers make it to fly gliders: 60% to 70% of the soldiers who were there are sent back to their regiments.  Lynton says he never understood how he made it through to the next step: he’s not the kind to shine his boots! But after a couple weeks, he is told to get on a truck and is driven to a small airfield north of London. Lynton can’t believe his luck, he is so happy not to go back to the gun site!  Once at the airfield, he sees airplanes that are small and very close to WWI airplanes, technologically speaking.  The future pilots are learning to fly them and their instructors are pilots from the Royal Air Force.  After about 8 hours of flight, Lynton is allowed to do his solo flight, after which he does a little more flying.  He is then sent to another airfield where there are training gliders.  After about 2 weeks there, he is sent to another airfield where he is introduced to operational gliders.

In 1940, the Germans used airborne forces with gliders and parachutes and captured a fort in Belgium. That fort was considered to be impregnable.  They took it in about 48 hours using gliders.  Winston Churchill took a note of this and realized that Britain needed airborne forces.  The glider pilot regiment was formed and it was just about 2 years old when Lynton joined it.

After his flight on the operational glider, Lynton gets his wings and is posted to an operational squadron in the south of England.  This is about three or four months before D-Day. There are only about 25 pilots flying the type of gliders he is flying.  He is a 2nd pilot and most of the first pilots of his group have just completed the first airborne operation in Sicily. Military speaking, the operation was a success but it was actually a terrible disaster. Many things went wrong and there were a lot of unnecessary loss of lives. Around 40 glider pilots died in Sicily.

Everyone is ready for D-Day and on the 6th of June 1944, 90% of the regiment takes off for Normandy… but not his squadron.  They are very surprised and believe it or not, disappointed says Lynton.  With perspective, you had to be a little bit out of your mind to be disappointed not to go!  They are told they are being kept in reserve for special assignments. After about 6 weeks, they are told they are finally going to France, to Brittany specifically.  Their mission is to bring jeeps in their gliders to help the resistance. They are supposed to land in a small place in the south of Brittany, and watch out for a fire that is going to be lit by the resistance to guide them into the landing field.

Lynton and the First pilot named Harry take off around 6 or 7 in the evening with the rest of the crew.  The weather is good.  After 3-4 minutes, a piece of the cabin flies out. It is a small piece but Harry is worried the airplane will fall apart. So they turn back, land and transfer to another glider.  They take off again and when they arrive, it is beginning to get dark and they see the fire. They start the landing procedures.  The field is quite small and there is an apple tree in the middle. The fire is at the end of the field. Lynton notices several gliders have already landed. They need to decide on which side of the apple tree they are going to land. Harry opts for the far side, but they both quickly realize they are not going to make it without hitting the tree… and that’s exactly what happens! Both Lynton and Harry are knocked out cold. Lynton wakes up to find out he is injured and can’t walk much. Turns out the fire they saw wasn’t the one lit by the resistance. It was a house set on fire by the Germans.  They had no way to know that. Luckily though, the resistance finds them, take them out of there and hide them from the Germans for the next 2 or 3 weeks.  The Germans offer a reward for their capture. Lynton and Harry are kept in different places in houses and cottages, in a bakery (they are transported in the bakery van because the owner is allowed more gasoline to deliver her bread) and even a small castle. The owner of the castle is pro German but luckily his employees are not and the owner is away. It is a good place to hide because nobody thinks to search that place.  Eventually, they end up in a small town where there is a convent used as a temporary hospital.  The nuns and the doctor there can’t do much for them because the Germans have taken all the drugs and medication.  All they can do is give them a bed. While they are there, they are visited by a British officer who is very surprised to find them there.  He gets them back to England.   Lynton is then sent to a hospital in South Wales.

While he is there, his regiment does another operation in Arnhem, which is a total disaster. The casualties are very high, on top of the wounded and prisoners that are taken. The regiment sustains a huge loss.  When Lynton gets back to his squadron, he is surprised that so few glider pilots are around and he is wondering where they are all gone…

Soon after, he is sent to another squadron and by that time the Germans are losing the war but don’t want to surrender.  They keet fighting. On March 24th 1945, the glider’s regiment does their last operation, called Operation Varsity. 400 or 500 gliders take off.  Lynton’s glider is carrying a whole platoon of soldiers in the back. Once in the air, about 1 mile in front of them, one plane is hit, takes fire and goes into a dive. They also have to deal with a lot of anti aircraft fire. As they are preparing to land, a gun opens fire directly ahead of them.  Lynton sees the bullets go under his feet! They hit the tail, the glider dives into the ground. Everybody gets banged around quite a lot. Luckily, Lynton doesn’t have any broken bones. The officer standing behind the pilots doesn’t have that chance: his leg is broken.  Lynton is unsure what happened to the other soldiers in the back, but they must have been banged around and maybe some of the bullets hit them as well. They land near a big farm house with a lot of windows.  Lynton thinks to himself “If I was a German commander, I’d have some soldiers in a house like that”. His thought is to get to the house as fast as possible, before Germans soldiers show up at the windows. He runs there and is the first to get in the house. He goes to the first window on the ground floor, it is open. He peers into the room and sees a bed… and six German rifles. He gets in the room, goes through the door and finds himself in a passageway leading to other rooms and an indoor barn. While he is standing there with his little pistol, a door opens behind him and two women come out, one of them with a baby… and behind them, six soldiers.  Fortunately for Lynton, they are just middle aged farmers, not front line soldiers and they have wisely decided they are not going to die for Hitler. They are hiding in the basement. And that’s where they are going to be kept.

After a few minutes, a lot of soldiers come into the house, some from Lynton’s glider. The house itself is not under fire.  But Lynton begins to feel dizzy, maybe from delayed shock, and he is bleeding. Across the field comes a jeep with a big white cross on a red background and two soldiers.  They tell Lynton he should go with them. And so he does, since things seem to be under control, they are not under direct fire.  He is taken to a first aid station where he spends the rest of the day. That night he is taken back across the Rhine River and is then sent to a military hospital in Brussels. When he wakes up the next morning, he steps out of bed, and a voice screams “NURSE!  He’s getting out of bed, he’s a bed patient!!”  He thinks for a second he is going to be put under arrest! But nothing liked that happens and he is released after a few hours and sent to Bruges. He spends the night there. The next day he is flown back to England and that is the end of his military career. More or less.  He does spend a year and a half in the Middle East after that, before being demobilized. And that’s a whole other story.

When he joined the army, Lynton didn’t know how to drive a car… yet he became a glider’s pilot.  Nothing in his life before that was leading him to become a pilot. And after the war, he never flew as a pilot again.

I would like to thank Lynton and his wonderful wife Isla for their time. It was a wonderful spending time with them and getting to know them and a pleasure to take Lynton’s photograph.