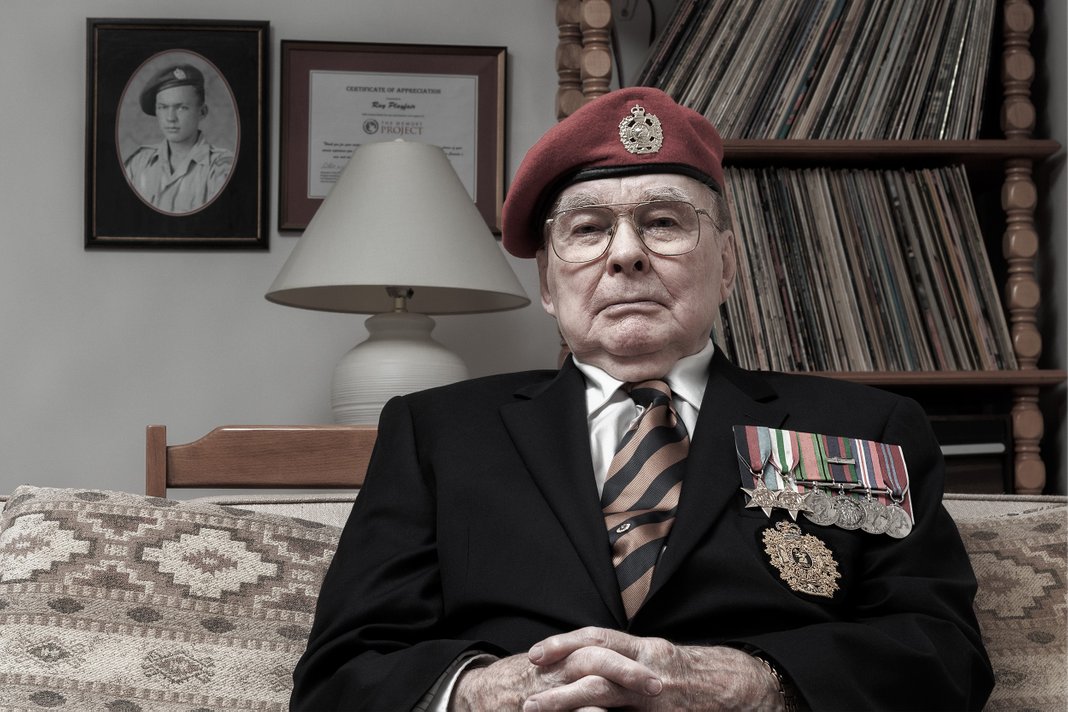 Raymond is a Canadian that grew up in part in England. His mother and Grand-Mother ran a pub there.  When World War II started, Raymond was living and working in England. At that time, he was employed in a place where they built and assembled planes and such.  After the start of the war, when he reached the legal age, he decided to become a soldier.  He always dreamt about becoming a soldier.  He could have enrolled in the English army where he had been a Sergeant in the cadets.  But when it came time to decide under which banner he wanted to serve, he chose Canada.

He got offered to be a Captain right away, since he had cadet experience.  But he refused, he wanted to start as a regular soldier.  Since he had lived in Montreal, he joined the Blackwatch.  However, the Italy campaign had started and the army wanted to send more soldiers there.  Raymond therefore joined the Hastings and Prince Edward Regiment.  That regiment has more medals than any other during the war. Raymond joins them in continental Italy.

He will participate in many encounters between the Germans and the Canadians, all in difficult conditions: heat, mud, lack of drinkable water, etc.

Raymond was wounded during the Italy campaign. He was in a house with other soldiers and was defending the position. He was downstairs and the others were upstairs. A wounded and scared German soldier  came into the house and Raymond sees he's a medic.  The German soldier bleeds quite a bit.  Raymond patches him up.  The German soldier is obviously very nervous.  He's showing Raymond pictures of his family. Raymond tells him not to worry, nothing will be done to him, since he's a medic.  Raymond offers him two choices: take him as a prisoner or let him go back to his side.  The German soldier is very surprised and decides to go back.  Raymond goes upstairs and sees the Germans started to surround them.  He throws a couple grenades at them.  He then goes back to where he was coming from and while looking around him, he finds stuffed birds.   They make him think of his Grand-Mother who loves them.    A few minutes later, a tank starts shooting at the house.  Raymond is hit and looses consciousness.  When he wakes up, he his covered in feathers and for a couple seconds in his state of confusion, he's convinced he's a bird!  But only for a few seconds, because he passes out again.    When he wakes up again, wounded at the leg, he's being  dragged by two German soldiers to where the other Canadians are.  He passes out.  When he opens his eyes next, he sees a German doctor coming their way.  It turns out the doctor was coming from the German medic Raymond had previously patched.  He was sent to take care of the wounded Canadians, as the Canadian medic had been killed.  Destiny...

Raymond is being cared for and returns to England.  There, he is given the opportunity to go fight in Japan after a stop in Canada.   That's where he is when the war ends before he can leave for Japan.  The army offers to pay his ticket back to England but love makes him stay, forever.  It is during his stop in Canada that he meets the love of his life, the woman who became his wife of 68 years to this day.

When Raymond tells his story, we understand that as a cat, he has many lives. He was shot at so many times during the war... After the war, Raymond goes back to England to visit and goes to see his old work colleagues.   When he gets there, he learns that a bomb dropped where they worked and they all died... Raymond truly has many lives...

It truly was an honor to meet Raymond Playfair.  A great man.