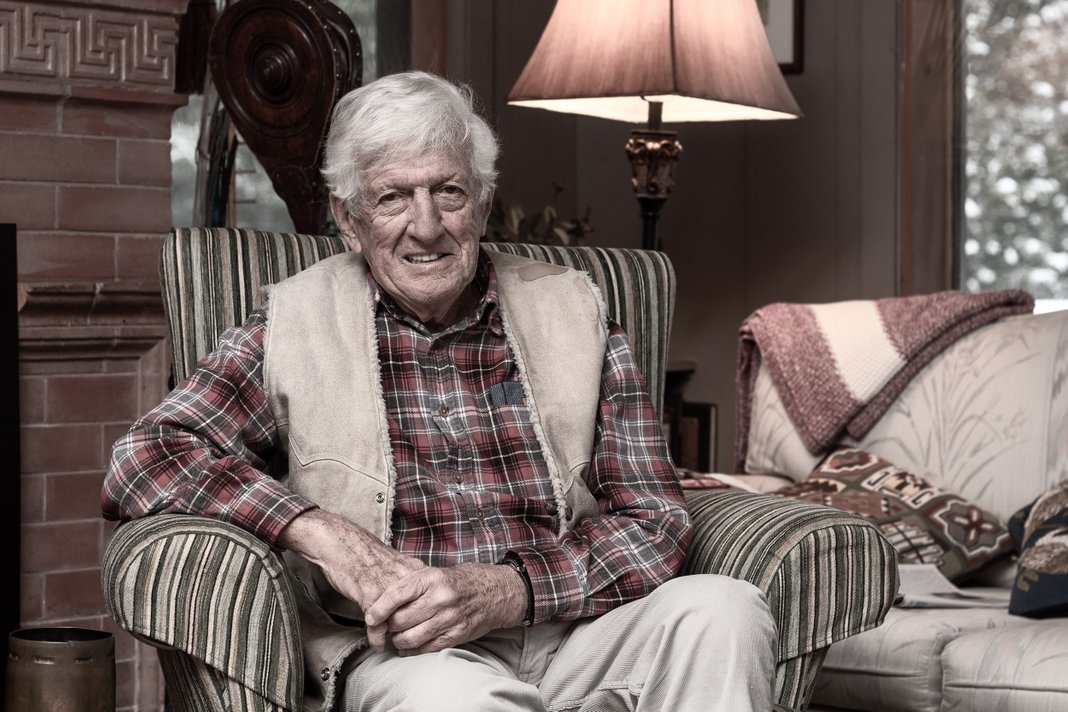 Hugh was born in Montréal, Québec in 1926.  In 1943, as a young man, he entered McGill University to study medicine. That particular field had never been a dream of his per say, but his step father was a neurologist. He took Hugh to work one day and Hugh was fascinated by what he saw at the hospital.  Over the years, he leaned that way until he entered McGill; when asked what direction he was going to take, he said Pre Med, out of the top of his head and that’s how his career in medicine started.

At the time, Montréal was moving to the beat of the drums of the war.  A lot of service men and women everywhere, a lot of activity.  Rationing wasn’t that big of a deal.  Conscription however was an issue, especially in Québec.  The politicians were the ones that were talking about it most, but you could feel it was different in Québec versus the rest of Canada.

In April 1944, after a year at McGill, Hugh made the decision to join the Canadian Merchant Marine to take part in WWII.  He was 17 at the time and a lot of people his age were joining the army. All his friends had joined either the air force or the army.  Hugh was too young to join any of these two branches of the army, but the Merchant Marine would take men as young as 17.  Two days later, he was already on his way overseas. His ship was one of the first one to leave that year, as spring had just arrived.  It was loaded with ammunition, planes, guns, ambulances and even a couple locomotives. Hugh had never been on a ship before, he had never even seen the ocean, or the tide for that matter.  The first time he saw it, he was totally amazed! He also tasted the water and to his utter surprise, it was salty! These were his two big surprises as he entered his journey.

His ship joined a small convoy of 8 ships.  Their first stop was in Nova Scotia. They then joined a convoy of 178 ships, the biggest one at the time. Everything they were taking over was in prevision of the Normandy landing.

On the ship, he was a mess boy: preparing and serving meals. Luckily he was never seasick, even though he went through some terrible storms on the ocean. At the time, the convoys took four weeks to reach Europe. Convoys move very slowly. As they landed in England, they had a couple days off, right around the time Germany had launched the first V1 weapon in London. But even though they were being bombed, it was business as usual for the inhabitants of London.  Hugh said he was never scared once throughout his whole experience. He was very young and naïve which explains why he wasn’t scared.  He didn’t understand what he was doing was dangerous, whether it was on the ship or during his time in a city that was being bombed on a regular basis. His mother however was very frightened for him but very proud of him.  That made him feel good.

On the ships, you got very little news about the events that were happening.  They would get the big news like when the Normandy Landing took place, but no details until you reached your destination. Turns out Normandy was a destination for Hugh as well: right after the Normandy landing, he was part of the ships that unloaded materials for the soldiers. During his time in the Merchant Marine, he went all over Europe and North Africa.

When the war ended, it was time for Hugh to go back to McGill. He was very aware of the importance of the event he had just took part in at the time, but it took him 20 to 30 years and meeting many other veterans with many different experiences to realize the danger he had actually been in.  When he got back to McGill, he was in school with other war veterans some of which had terrible experiences at the war:  imprisoned by the Japanese and the Germans, many wounded… It’s being around those people, that generation of men, that made him realize with time how dangerous it all had been and how lucky he was to have had the war experience he did, compared to others. Globally, being on these ships was a great experience for Hugh.  He said he matured a lot in a couple years.

When he was resident at the Montreal Children’s Hospital, he went to a party at the Naval Officers Club.  There, he and another veteran named Willie were looking at some pictures of sailing ships of the war of 1812. They started talking about WWII and Hugh mentioned he was in the war. Willie said he was too, but on the wrong side. Willie was German and he had been a submarine sailor in the German Navy.  While talking and learning about each other’s stories, they figured out that Willie’s submarine had actually attacked the convoy Hugh was in.  Luckily, nobody was hurt during that attack.  It was the last attack Willie took part in.  How incredible is that? Willie, as a German submarine sailor, had tried to kill Hugh, and at the time Hugh would have been happy to see Willie die too… During the war, they were just two young men fighting each other like so many other young men, for reasons that they hadn’t created.  They were part of something bigger, something they did not control, that made them enemies.  But after the war, everything was different.  They became good friends.

I would like to thank Hugh for participating in my project.  It was an honor to meet him and his wife Lyne, to hear his story and to photograph him.  Thank you for everything Mr. Brodie.