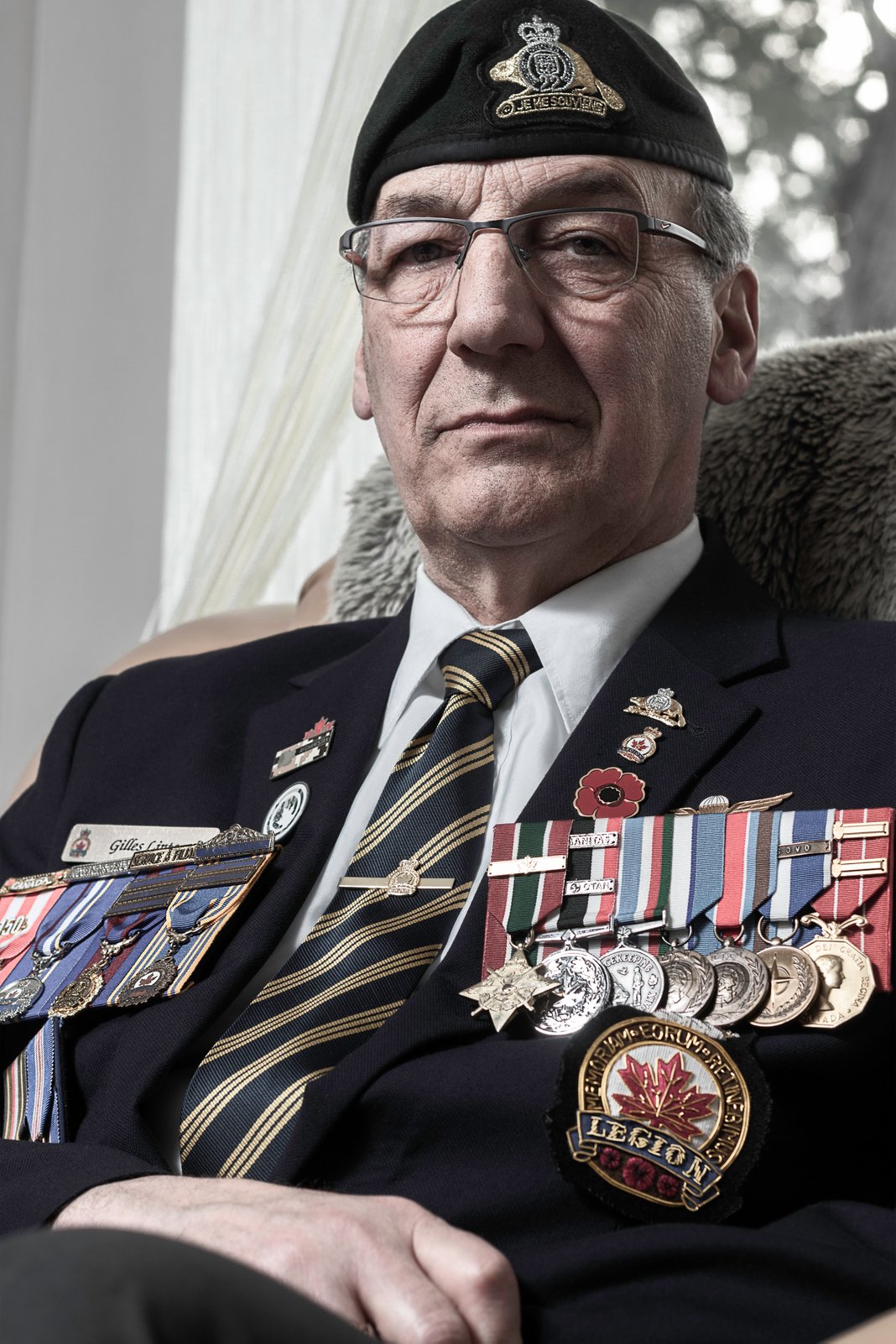 It’s so interesting to talk with Major Gilles Linteau about his career in the Canadian Armed Forces.  He even got to act as an interim Lieutenant-Colonel for six years.  Not only did he have a full career, but paradoxically, it could also never have happened…

Gilles was born in Loretteville, near Québec City.  Since he was young, Gilles had a passion for sports.  And even thought certain elements present in his life might have pushed him towards a military career, his defiant personality and his education where he was thought to take things as they come could have led him in another direction.

Gilles’ father was in the army Reserve and Gilles admired him when he saw his father come home in his uniform.  His father also encouraged his children to have a career in the army or the government so that they could lead a good life.   Gilles’ younger brother followed their father’s advices and enrolled in the army.  But all through his younger years, Gilles didn’t have a defined plan for his future nor any particular desire for a specific career.

Between age 12 and 19, Gilles is a member of the cadet’s corps and even becomes the commanding officer and later, an instructor.  He goes to college but ends his studies at age 21 when he gets married.  He still plays sports, hockey amongst them.  After his divorce 4 years later, he needs to make a decision for his future.  There are three things Gilles likes above all others:  playing sports, travelling and having responsibilities.  The army has the possibility of offering all three.  He chooses to enroll.  He’s 26 years-old.

Regardless of his decision to enroll, a lot of different things told him not to do it.  As a matter of fact, people who know Gilles would not have seen him having a career in the army.  Gilles is someone who tells it like it is, no matter who you are or what your rank is.  That could be a problem if you want to have a military career, especially as you move up in ranks.  That said, if he is given a direct order, he will follow it.  That’s how he’s been raised.  But Gilles says that if you are yourself and respect your own values, you will succeed in life.  And anyway, when he enrolled, he didn’t have any specific ambitions other than accomplish his three objectives mentioned above.

With persuasion, he manages to start his career as an officer, even thought he has not completed his collegial studies.  His first mission out of the country is in Germany. At first, he’s not sure he wants to go because he has a daughter who will remain in Canada.  But it’s a good opportunity and so he agrees and stays in Germany for 3 years.  During that time, he will come back multiple times to Québec to see his daughter.

He gets to Germany as a military intelligence officer.   Back then, it’s still the Cold War.  He participates in many training sessions amongst which the one called "Snowball", where soldiers are deployed at 4h AM to train in case of a real attack.   His role is to get information.  After a year and a half, he becomes Deputy-Commander of an infantry company.  Gilles also takes some time to visit Europe during those years in Germany. For him, it was three beautiful years.

Upon his return to Canada, he spends 2 years in Valcartier.  The first year, he works at the headquarters of the 5th brigade and he is in charge of organizing collective training.  The second year, he becomes executive assistant to the Base commander.  While doing that, he also does his class to be able to become Major.  Once he’s done with that, he goes back to the battalion as a Deputy Commander of the service company.  He is in charge of all the logistic aspects of a unit: anything that has to do with medical, transport, food, mechanic, etc.

According to Gilles, the Oka Crisis helped improve the image that people had of the Canadian Armed Forces.  The mission is to help the civil authorities.  Gilles’ unit is deployed on the South Shore.  Their mission is to open the access roads to the Mercier Bridge. From a personal point of view, coming from Loretteville which is close to the Wendake reservation, Gilles has Native friends for whom he has a lot of respect.  He therefore makes sure he does the mission for which the Army is deployed and excludes is own opinion on the matter.

The crisis lasts two months and half. According to Gilles, they could have solved the whole thing in a week but the conditions under which it would have happened would have been devastating for a long time.  The way they acted helped quite a bit with the public opinion of the army.  The mission ends in October 1990.

In 1991 he becomes Major.  A year later, he goes on a mission in Cyprus with the same unit.  It is a UN mission.  He takes care of an infantry company and a 30kms frontier line.  He is there from February to August.

Normally, there needs to be a year between missions.  After a year exactly, Gilles is sent to former Yugoslavia as the commander of a service company for a NATO mission.  That mission is a real challenge on the logistic level due to the big differences in climate in the sectors where the solders are deployed.  He remains there from October to April.

In 1994, Gilles is sent to the Officer’s school as an instructor and commander of a company.   The plan is he’ll be there for 3 years.  It’s a good attribution and his superiors tell him how much of a gift he got.  But at the same time, Gilles wants to do his class to be able to move up to Lieutenant-Colonel.  The class lasts one year and counts as a 3 year university degree.  That would leave him something to take with him when he retires from the army since he had not completed college before enrolling and only had a high school diploma.  He makes the decision to do the class even though his superiors are not happy with it.  He succeeds and gets his promotion.  His text called « Le leadership des forces canadiennes : pouvoir et politique », written during his class,  is even published. As a matter of fact, certain facts and recommendations mentioned in the text still apply today.  However, some of what he said in that text did not make him friends in the Armed Forces.

In 1996, Gilles is sent to the headquarters of the 1st Canadian division in Kingston as a planner – ground forces.  But we are now in the aftermath of the Rwandan genocide and it is the Zaire Crisis.  1 300 000 Rwandan refugees need to be returned in their country.  Gilles leaves in November for this NATO mission. He makes a 3 week stop in Germany first, at the headquarters of the US Special Forces, to plan the mission.  But the refugees start to go back by themselves.  The mission is cancelled.  But it still needs to be closed properly, some equipment need to be sent back, etc.  Gilles finds it to be a very good mission for the experience of planning in a high leveled military staff.   That is also when and where he meets his future wife who is a non-commissioned officer.  Well… the officers and non-commissioned officers are not supposed to have personal relationships… oops!  They’ve been together for 23 years.

Gilles is then sent to the Lester B. Pearson Canadian International Peacekeeping Center in Nova Scotia. It’s a Canadian school put in place to teach others about the Canadian peacekeeping experience in UN missions.  At the time, Canada is the only member of the UN that participated in every single mission.  Gilles is an instructor there for 2 years. He is "the" French speaking person of the place.  Every class given in French has to go through him.  He works long hours and meets people from everywhere.

After 2 years, Gilles is offered to go back to Germany with NATO’s ARRC . He is part of the operative section.  In garrison, they are about  400 soldiers. In mission, that number doubles. It’s a big organization.  That is when the Kosovo events take place.  The ARRC is the only organization capable of deploying in 24h.  It’s a stabilization mission.  Gilles remains there 2 months and a half as a staff officer.

Upon his return, he is offered to work at the NATO headquarters, where is given the Ukraine file.  The Ukrainian army has 800 000 soldiers and Ukraine wants to reduce it to 250 000. Gilles has to work on a plan with NATO and Ukraine’s Foreign Affairs in cooperation with the Department of Defense.  He spends 2 years there. Amongst his work duties, he writes speeches for NATO’s military committee President, who’s a  4 stars (no pressure!). He really enjoys his time there which allowed him to learn a lot about the politic aspects of things.

Back in Canada, he is sent to Kingston as an instructor for a year, to teach the young captains that want to become majors.   He is offered the job of the Longue-Pointe garrison coordinator, where he is in charge of logistic and staff support.  While he’s there, his friend General Laroche offers Gilles a mission in Afghanistan.  But Gilles is 54 years-old and could retire at 55... Or stay until he turns 60.  He has to make a decision and he decides to go. He stays there 10 months and his role is to ensure communication between the governor of the province and his commander.  He has 3 liaison agents with him and the governor’s communicator. To ensure their security, he has local Afghan employees who had their parents killed by the Talibans. When he first gets there, he notices that there is only a 10 foot wall to protect them. While he’s there, he improves the camp’s security by adding barbed wire and cameras.  He goes to KAF (Kandahar Airfield) once a week to relay the information he needs to replay and receive the one he needs to receive.

During his turn in Afghanistan, he gets an interim promotion. After his return, in theory, he should have stayed in Longue-Pointe but he had heard there was a position in Poland. He joins the JFTC (Joint Force Training Center), one of NATO’s two schools that prepare the solders that are going to deploy in Afghanistan’s headquarters.   He takes care of the tactical and operational aspects.  He stays 4 years during which he will often travel to the US to teach the Americans.

Then comes the time to retire.

What was it that Gilles appreciated the most in his career?  His first trip to Germany.  But if we are speaking about life and career, then it’s Afghanistan without a doubt, because he was later able to pass on what he learned.

And if he had to do it all over again?  Maybe Gilles would not enroll.  You think that’s weird?  Remember the beginning of this text, the way he says things directly.  Gilles is not a soldier by philosophy, he’s not a politician.  It is not in his nature, in his personality… but regardless, and all in contradiction, he remained in the army for 33 years and achieved his three objectives:  he practiced sports all his life, he traveled and he had responsibilities.

Gilles does not miss his work, he did what he wanted. He did his time. Today, he is a member of the Canadian Legion and what he does there is very important to him:  he listens to and helps his colleagues that need it.