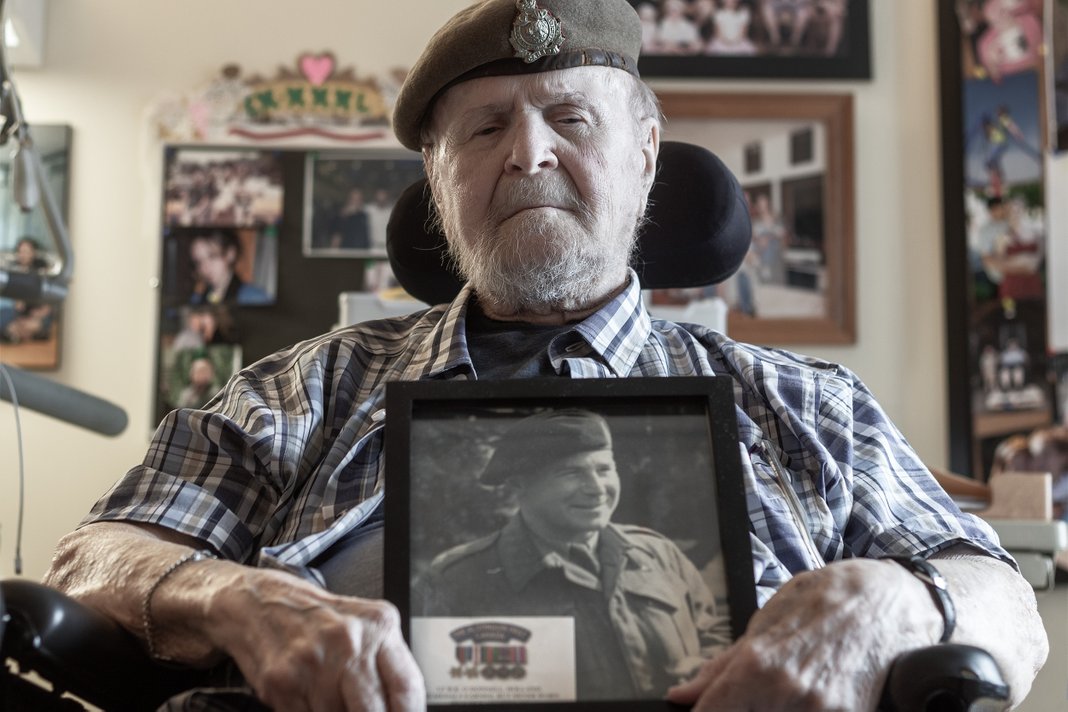 Wolf Solkin fought in WWII.  And Wolf Solkin is currently still fighting a war. He describes himself as a one man advocate/activist for the Veterans living at the Veterans Hospital in Sainte-Anne-de-Bellevue, Québec. Wolf’s fight is not only important for him, but for many of the residents there.  For Wolf, the Second World War is the past, and the current situation is what matters most.  I will therefore start his story by explaining his current fight, before telling you his WWII story.

Wolf is 96 years-old and has been living at the Veterans Hospital for many years. A few years ago, the hospital, which had been under the care of the federal government since its creation, was sold to the provincial government which made it a CHSLD.  The deal was that the pre-existing level of care that was given to the veterans would not change despite the sale of the hospital. In order to achieve that, the federal government sends a certain amount of money per veteran to the provincial government. The money’s sole purpose is to be spent towards the care for the veterans.  But Wolf says there has been a drastic change in the level of care given to the veteran residents.  After the hospital was sold, 40% of the staff left and the hospital has been struggling to replace them. Wolf is wondering where the money given by the federal government has gone, because it doesn’t show in the level of care the veterans receive.  He tried to get that information using many different ways but wasn’t able to get an answer. After 3 years of writing letters to many different levels of governments, to newspapers, after multiple appearances on TV, radio and magazines and getting nowhere, Wolf filed a class-action lawsuit.  He is suing both governments as well as the administration of the hospital. The supreme irony is he once fought to preserve those governments… and he is now fighting against them to preserve the veterans’ care.  This is the fight that matters to Wolf.  It is important for him to do it not only for himself, but also for those veterans at the hospital who cannot do it, or are scared to do it.

Wolf is courageous now, just as he has been during the war.

Wolf was born in 1923 and enlisted at 19 while he was studying sociology at McGill University in Montreal. Wolf has always been very anti-fascist, on top of being a Jew which also made him very anti-Nazi.  He was a member of the McGill reserve training battalion. In 1942, in order to encourage people to enlist, McGill gave the possibility to the students in their senior year to enlist and still write their exams for their degree. That’s what Wolf did. He was able to graduate before he left for war.

Wolf chose to be in the artillery. He became an officer and was sent to England in 1943 to train and wait to be called. They were training for D-Day. They knew an invasion was coming but they had no idea when it was going to come.

During his training in England, Wolf met Bill O’Donnell, also a Montrealer.  They quickly became best friends. One day, Wolf was in the back of a convoy on a motorcycle during a training when he had a very serious accident. He had to spend many months in the hospital for care and rehabilitation.  When he got out, the upper command was reluctant to assign him to an artillery unit because of the many concussions he had suffered.  He therefore decided to transfer to infantry. As a Montrealer, he was offered to become an officer of the Blackwatch.  But the Algonquin regiment was also looking for two officers.  Wolf and his best friend Bill wanted to stay together so they both chose to transfer to the Algonquin regiment and were sent to combat.

Wolf does not want to go into combat details: war was war.  Sadly, both Wolf and Bill represent the war: Wolf came home, Bill didn’t.

Bill’s been with Wolf ever since; he’s been carrying Bill’s photo with him everywhere he goes. Wolf also takes him to every ceremony, every Remembrance day. During the war, before combat, Wolf and Bill had made each other a promise: whoever survived would contact the family of the other. At the time of his death, Bill had an infant daughter who had never seen her father.  It took Wolf 40 years but he finally was able to fulfill his promise to his best friend; he found his daughter and gave her her father’s message:  “Tell my daughter that I love her”.  By then, she had 6 children of her own, and also grandchildren. Her family knew very little about Bill. Wolf was able to talk to them about him and give them a copy of his photo.  Wolf and Bill’s daughter kept in touch ever since.

To this day, whenever people go to Holland for different reasons, like military pilgrimages, Wolf makes sure to give them photos, personal souvenirs, badges, letters to be buried at Bill’s grave marker.

Wolf says the series and movies about the war are pretty authentic.  But that they usually only show heroism.  They don’t show fear, uncertainty.  The instinct for self-preservation fighting against the instinct to enter combat. These are all realities of war.  Wolf says the courage is to keep fighting in spite of the fact that you are scared.

In the above photo, Wolf is holding the photograph of his best friend Bill O’Donnell. I wish the best of luck to Wolf in his battle against the government for better care for the people who fought and bled for us during WWII and the Korean War.  Thank you Wolf for your time and for sharing your story with me.  You are a giant of a man and I will never forget our encounter.